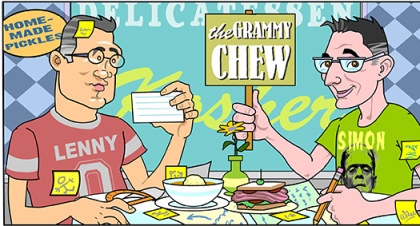 Who are the “locks” for the top Grammy categories? You say you don’t like “locks?” Fine, let’s say “favorites.” Whatever you call them, half the biz is asking us who we think the definites are for the Big Four; the other half, we imagine, has already made its lists. So here’s our assessment of the field as of mid-September, divided into the three or so we consider favorites (the ones whose absence from the category would be shocking) and those we’d call probables for the rest of the field.

We agree that Black Lives Matter and the ongoing conversation about gender will figure prominently in the nominations. The list is not exhaustive and we look forward to eating at least some of our words later. Also: Grammy will do what Grammy wants to do. And with that, we go to the list.

ALBUM OF THE YEAR

We agree that chart juggernauts The Weeknd , Harry Styles and Lil Baby make the short list. We differ on Taylor Swift ; Simon believes the critically adored folklore will have a strongly vocal constituency, whereas Lenny believes the record lacks the heft to make the upper tier.

Juice WRLD rates as “highly probable” with his genre-crossing posthumous set; the same can be said for another album from an artist taken at a tragically young age: the star-studded set by the late Pop Smoke . Dua Lipa , Jhené Aiko and the Chicks all made potent, well-received albums and will likely be considered. Lady Gaga is the quintessential “Grammy artist,” and her Chromatica will have plenty of votes. The extremely challenging set by Fiona Apple got major critical love and could well land a nom.

RECORD OF THE YEAR

The Weeknd’s “Blinding Lights” and Post Malone ’s “Circles” make the cut on the basis of commercial and cultural clout alone. Lil Baby’s “The Bigger Picture” belongs among the faves for crystallizing the political moment in a highly accessible way.

Harry Styles’ “Adore You” and DaBaby ’s “Rockstar” are practically favorites; Harry might slip here as he’s honored elsewhere. Dua Lipa’s “Don’t Start Now” is highly decorated. Doja Cat ’s “Say So” was a pop phenomenon. Megan Thee Stallion ’s “Savage” was a monster. Juice WRLD’s Marshmello collab “Come & Go” may be the selection from his album with the broadest appeal. “Roxanne” by Arizona Zervas was the streaming smash that began the TikTok gold rush—look for this one to have a large cheering section.

SONG OF THE YEAR

The Weeknd’s “Blinding Lights,” Harry Styles’ “Adore You” and Lil Baby’s “The Bigger Picture” loom above the landscape.

Dua Lipa’s “Don’t Start Now,” Maren Morris ’ “The Bones,” Gabby Barrett ’s “I Hope” and JP Saxe ’s “If the World Was Ending” have plenty of heat in this songwriter category. Taylor Swift will be strongly considered, but for which song? “cardigan” and “betty” seem the strongest contenders.

Summer Walker remains at the front of the pack as she leads a revolution in R&B. Love for the late Pop Smoke in the community pushes him into the front ranks for an unprecedented posthumous BNA nod. Doja Cat’s big hit and vivid, zesty persona signal a true arrival.

Who are the “locks” for the top Grammy categories? You say you don’t like “locks?” Fine, let’s say “favorites.” Whatever you call them, half the biz...

. Lady Gaga is the quintessential “Grammy artist,” and her Chromatica will have plenty of votes. The extremely challenging set by Fiona Apple got major critical love and could well land