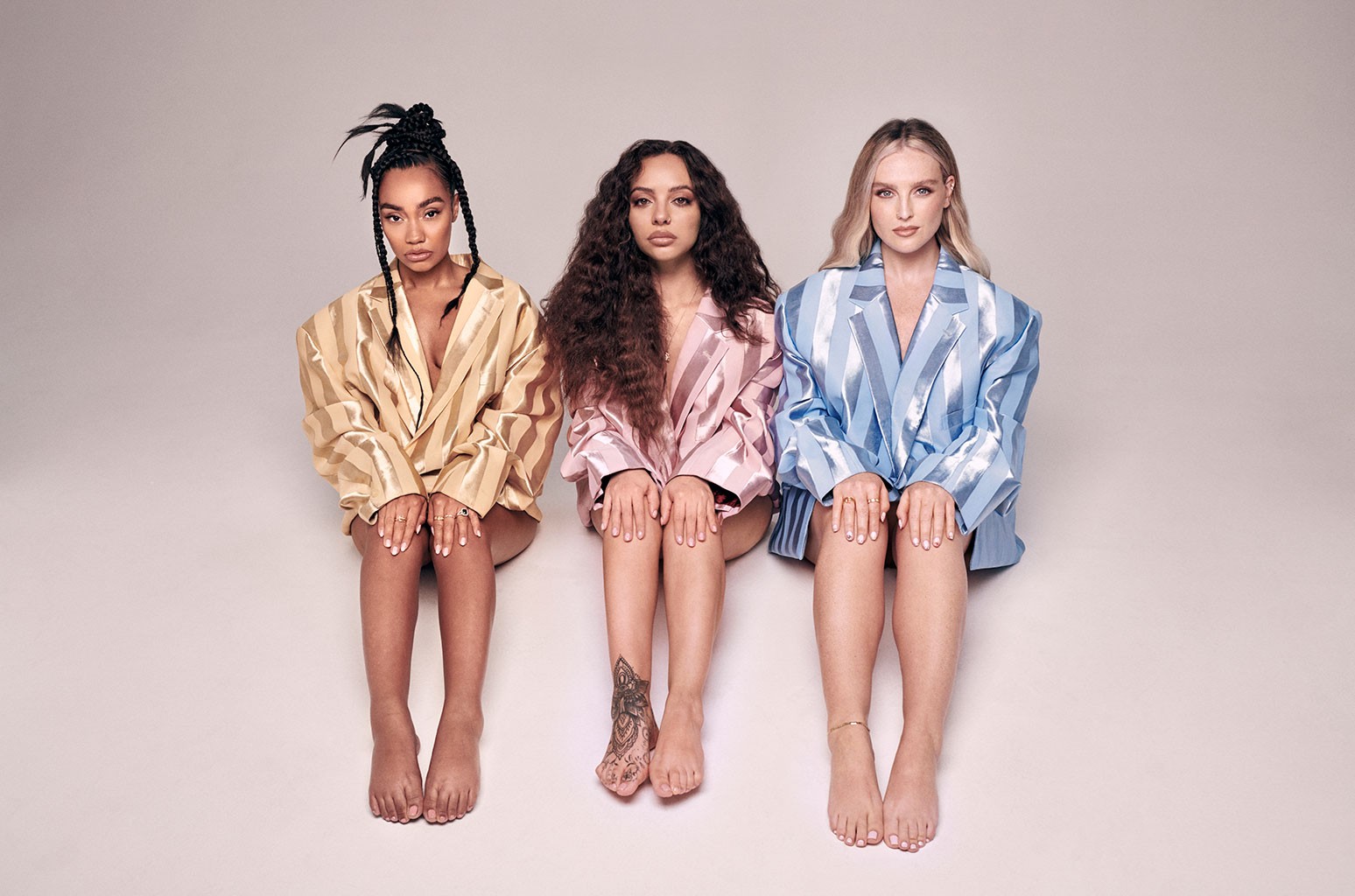 How to Become a Little Mix Stan, According to Little Mix

Now a trio, Jade, Perrie and Leigh-Anne look back on their catalog and reflect on why 2021 has been an "amazing year for all of us"

The song you’d tell a new fan to start with:

The song you have to include in a setlist or fans will riot:

Jade: It’s the one that generally tends to react the best. Every single person in that audience can relate to that song. Everyone’s got an ex. Everyone has that person. And so when we perform it, you can just see a sea of people screaming it out in the chorus and doing the fist-pump move as they do it. It’s a proper feel-good anthem that everyone can join in on.

The song you always want to perform – even if no one else cares:

Jade: Oh my God. I remember on the Glory Days tour I would’ve fought to the death to get “Nothing Else Matters” on the setlist.

Jade: “I was like, I don’t give a f–k who likes this, it’s goin’ on.” And I actually think it reacted really well on tour, audiences did really like it. It’s a lovely little breather moment. “Nothing Else Matters” was an underrated bop on the Glory Days album.

Leigh-Anne: I feel like everything I love never bloody makes it! [Perrie joins the video chat.] Hi Perrie! We’re talking about the song you love to perform but you don’t give a s–t if no one else likes it. I was just saying every song I love never makes the setlist because I love the underdog songs.

Perrie: Oh no! That must be so annoying! But I feel like it’s true.

Leigh-Anne: It’s true! [Laughs.] On Confetti , I love “Breathe,” but that’s just not really a favorite, which is upsetting. Another favorite is “I Love You” [from Get Weird ]. We’ve never performed that. That’s sad.

Perrie: For me, I always want to perform all the ballads. I just want to stand and sing for half an hour. But at a Little Mix show, that doesn’t really happen. We’ve got “Secret Love Song” and whatever big singles we have that are ballad-y, but I always want to do “Monster in Me” or “Love Me or Leave Me.” It’s hard because – this sounds so terrible and big-headed – we do have so many amazing songs! When we pick the setlists, it’s really hard to get our favorites in there.

The song that took your career to a new level:

Leigh-Anne: It changed the game.

Perrie: When we brought out “Touch,” we opened our fanbase so much bigger. Guys were listening to it on the radio thinking, “My God, this is a bop.” So many people got into Little Mix thinking, “This is sick, this is so cool.”

Jade: I remember we were [promoting] “Shout Out to My Ex,” but we felt really strongly that “Touch” should have been the lead single when we went out to the U.S. for the Ariana Grande tour [for Dangerous Woman ]. Also, the video actually wasn’t what we were hoping it was going to be. The [green-screened] backdrop stuff wasn’t what we thought it was going to be, and at first we were a little disheartened. And then we saw it, and it went viral, and were like “Oh! It is really good!”

And the fashion, too – Perrie, I thought the leather bustier over the sweatshirt was so cool and original.

Perrie: Thank you! Everyone hates that! The amount of s–t I get for that corset on a daily basis is beyond me.

Jade: It was a moment!

The song you’re most excited to perform on tour:

Perrie: “Sweet Melody!” It’s been out for over a year, it’s massive, but we’ve never performed it in front of a crowd. Isn’t that weird? We’ve done TV performances, but we’ve never done it for our fans.

Jade: When I was in LA recently, I went to a gay bar on a night out, and “Sweet Melody” came on. So many guys in the bar started doing the choreo. That’s when you know it’s a good one: if you can go to a gay bar and they know how to replicate the choreography.

The deep cut that became a fan favorite:

Leigh-Anne: It lifted off, didn’t it?

Jade: It deserved to be a single, but it didn’t quite make it. “Wasabi” has streamed better than some of the singles on that album, which is pretty wild. And also “Secret Love Song, Pt. 2” really took on a life of its own on the Get Weird album. That was kind of claimed as an anthem for the LGBTQ+ community among our fans. So it was nice that it organically took off and had a world of its own.

Leigh-Anne: “Love Me or Leave Me” [from Get Weird ] streamed really well.

Leigh-Anne: Yes, it’s, like, at the top of our streamed songs.

Leigh-Anne: That and “Wasabi” are the most streamed non-singles.

The old song you recently reconnected with:

Leigh-Anne: Remember “Towers” on the Salute album? I think the label wanted it to be a single, and we were like, “No, we don’t!” But now I love it. It’s lovely. Isn’t it weird how you change your mind?

Jade: I feel like that with “Woman Like Me” because so much s–t was happening around that time, it made me not like the song. I was just a bit tarnished by the experiences surrounding it. But years on, I can look back on it, and I’m like, “Actually, that’s a great pop song, it’s brilliant.” And the video is phenomenal, one of our best.

Perrie: Yes! I heard it not that long ago and was like, “Oh yeah, that is actually a good song.”

Leigh-Anne: [Singing] “She doesn’t like the way you wear your hair…”

Perrie: That lyric makes me feel a bit cringed out, but it’s a good song.

The song that gets a different reception overseas:

Leigh-Anne: “Reggaetón Lento” [with CNCO] was very vibey in Brazil. I feel like that is massive around the world.

Perrie: Why do I feel like when we used to perform “How Ya Doin’?” in Japan it used to go off? [The other two burst into laughter.]

Perrie: Japan loves a ballad. It’s absolute silence in the arena. You can hear a pin drop when you sing a ballad because they appreciate it so much.

The collaboration you can’t believe you’re part of:

Jade: When we did “More Than Words” on LM5 with Timbaland. He’s a legend in the producing game. And while we didn’t work directly with him on the track, when you listen to “More Than Words,” you can tell it’s a Timbaland track. Growing up, he was so monumental in the music industry. He brought out all those incredible songs, with Nelly Furtado and all that – and that album he did [ Shock Value ], which was banger after banger. It’s just iconic. So for me that was a good moment.

Leigh-Anne: One we don’t talk about enough is “Red Planet” with T-Boz of TLC. I mean, come on!

Perrie: A TLC member being on one of our songs straight out the gate was mad. We’ve been very lucky.

Jade: And Missy Elliott as well on the DNA album. Missy Elliott! I feel like I didn’t realize at the time how iconic that was. We literally got the OG queen of rap, Missy Elliott, an absolute legend, just casually doing a verse on “How Ya Doin’?” And she mentored Sharaya J, who’s on “Strip” [from LM5 ]. So that was a full circle moment, to know that one of Missy’s proteges is on one of our songs years later. That’s pretty cool.

The song you’d like to give a second life to with a remix:

Leigh-Anne: “Sweet Melody” with Cardi B?

Perrie: Or something like “F.U.,” but with Bruno Mars?

Perrie: That’d be sick, wouldn’t it?

The song you wish you could fix with one more day in the studio:

Perrie: Mine would be either the whole DNA album or just “Turn Your Face.” I had tonsils then, and I don’t have tonsils now. So when I listen back I’m like, “Who is that?” It’s mad. So I would re-record that album I think.

Jade: You sound so different on that album, it’s insane.

Perrie: It’s wild. I remember constantly being ill, constantly having tonsillitis. And I just had to record anyway. You can tell that I sound horrible.

The new song you’re most excited for fans to hear:

Perrie: We’re all gonna cry every time we hear it. Jade calls it our love song to each other. It’s basically about our friendship and our sisterhood and the love we have for each other. It’s really cute, and we know for a fact when we sing it on tour, we’re not going to get through it on tour without crying.

The songs that best showcase each other:

Jade: For Perrie, no-brainer for me is “Secret Love Song.” Because whenever we perform it live, she always holds that last note at the end: “I’m yooooours!” And some nights it feels like it’s gone on for f–kin’ 10 minutes, but in the best way possible. It’s phenomenal. That breath control is really second to none.

Jade: And the fans lap it up. And then with Leigh-Anne, ooh, what’s my favorite Leigh-Anne moment?

Perrie: I remember on “Your Love” when she does [singing the high notes] “Your love make me feel like!” and the whole crowd goes “Aaaaaaah!”

Leigh-Anne: I love that song.

Jade: There’s one performance Leigh-Anne does dance-wise, which one is it? I just saw it on Instagram recently. My Explore page is just moments of the other girls having amazing moments on stage. Instagram knows that that’s what I love.

Perrie: When we did “Secret Love Song” live on The Search – that gets me every time.

Leigh-Anne: I was just gonna say that for you!

Leigh-Anne: The end note, you literally do it like Céline Dion. You’ve never it done it like that before.

Jade: The Search “Secret Love Song” was great for all of us.

Perrie: I think we’re fantastic every time we perform! [Laughs.]

Leigh-Anne: You know what was really good? The last acoustic we just did, “Confetti.” That was great.

Perrie: Jade’s adlibs, they ate . They were very good.

Jade: Video-wise, for me “Shout Out” was a very good Perrie moment. Everyone latched onto the makeup look, the pink bits in your hair. For Leigh-Anne, I remember watching the “No More Sad Songs” video [featuring Machine Gun Kelly] being like, “Yeaaaaaah.”

Perrie: And “Power,” when she struts down the street with the dog? Unreal. And Jade in the “Sweet Melody” video – I mean, come on !

Jade: We could go on for hours.